From 25.2-4.3.17 a group of FM members escaped the rainy weather in Maastricht and spent the carnival holiday in sunny Arenys de Munt in Spain. Here are 10 lessons that I’ve learnt on our trip. Let’s start at the beginning:

Lesson #1: it is possible to fit nine triathletes, nine pieces of hand luggage and a big bike case in a Fiat 500 and a Fiat Panda.
When we arrived at Barcelona airport on Saturday morning, the first challenge was to stow nine people (average height of about 1,85m) and their belongings into two tiny rental cars. I have to admit that my bike case didn’t make it an easy task, but we didn’t give up. Finally we managed to push everything and everyone in, and enjoyed a cosy 50 minutes drive to our holiday home, which was, in fact, a luxurious villa thanks to the low season prices. Thomas and Filip missed this adventurous journey because they flew to Girona. In the afternoon the eleven-strong group was finally complete, enjoying a sunny afternoon outside at the pool. The cold water did not deter Iron Man Lex from being the first to jump into the blue wet.
When we went for our first run the same day, I quickly learnt lesson #2: easy running was literally a no-go. Our house was nestled in green hills and surrounded by a beautiful landscape. So running in the area was fantastic, but highly demanding. Even hiking was a tough activity. Many small sandy trails meandered through the forest, up to the top of the Montalt mountain from where you had an endless view of the sea.
The next day featured lesson #3: no-one is left behind. This motto does not only define cycling with FM in general, but also made the training week very enjoyable. When we went for our first 80km ride on Sunday morning, we started and finished together as a group. While the strongest athletes chased the KOMs and QOMs, the slower members could climb the Catalonian mountains in their own pace. 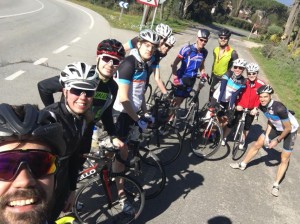 On Monday it was time for lesson #4: The cycling route that was called “Tom’s special” quickly escalated into what Thara later named “terror mountain”. When we clipped into the pedals that day, a long ride with 2300 meters of elevation awaited us. Our destination was the summit of mountain “Turó del’Home”. The tour involved a 20km climb, which ended at a windy plateau above timberline from where you could not only spot the last patches of ice in the barren landscape, but also enjoy a magnificent all-round view. With Tom up front, our group enjoyed a long “Tom’s special” descent down to Sant Celoni. 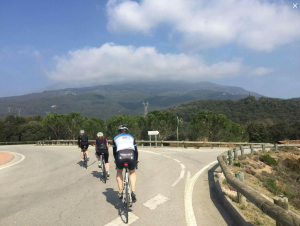 Two days later, the real hardcore athletes including Kai, Lex, Peter, Pieter, Thomas, and naturally Tom, even mastered “Tom’s special deluxe”, a 125km ride with two long climbs. After the exhausting trip on Monday, it was time to take it easy on Tuesday. Thus, we went swimming.
Lesson #5 is: swimming lanes is great, but relaxing in a bubble pool is even greater. While some grannies did their aqua gymnastics with deafening music, we swam a few lanes and eventually ended up in the bubble pool for some recovery.
This leads me to lesson #6: going two tired makes you too tired. In the evenings, a mix out of inevitable tiredness and deep satisfaction hovered over the living room where we cooled down by playing games, reading, analyzing efforts on Strava, eating chocolate or philosophising about triathlon.
Lesson #7: Don’t trust the locals. The Spanish cyclists, who dressed as if it was bitterly cold while we were cycling in shorts and T-shirts, apparently had a different understanding of what constitutes a beautiful cycling route. When we followed the recommendation of a local athlete to cycle along the coast, we found ourselves exposed to cars and concrete for the first 40km until we finally reached a spectacular 15km segment along the sea. Nevertheless, we made the best out of it and topped the ride with good Spanish potato omelettes in Tossa de Mar.
On the penultimate day, the intrepid trio of Gijs, Pieter and Lex went swimming in the sea, which presented lesson #8: keep cool.
I’m especially happy about lesson #9: no accidents, no problems. All members and all bikes made it home safely. Most importantly, you should remember lesson #10: Don’t miss the next training week or weekend!
Many thanks to Thara and Peter for organizing this fun week! 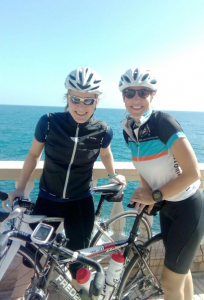