Sunday 19/03 , the first race of the 2017 RunBikeRun series took place in Hilversum. For most of us this would also 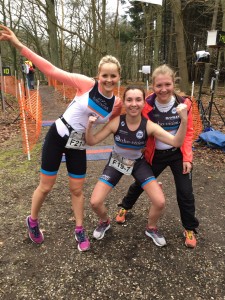 be the first race of the season. Ferro Mosae was well represented with both a women and men team at the start. Claire, Esmee and Sophie would represent FM in the women series. Kaj, Thomas, Roberto and myself would race in the men series. The start for the men was at 10.15 am, which meant an early start of the day. The alarm went off at 5.15h in the morning, and while I cycled to Kaj’s place, people where still coming back from a night out, wondering which idiot was cycling around Maastricht on a race bike this early.

The weather conditions were not ideal, some drizzle and a fair amount of wind, which we would feel on the bike. The first run consisted of four laps, totalling 5 km. I thought that the Netherlands were flat as a pancake, but somehow they managed to find a short, but nonetheless steep hill we had to ascend in each lap.  Roberto was the first one of the FM team to reach transition, followed by myself, Kaj and Thomas.

The bike part was non-drafting, which meant that strong cyclist would quickly move up to the front of the pack.

It was the first time I raced with aerobars, which improve aerodynamics but also imply a different position on the bike, and I soon started to feel muscles hurt I didn’t know existed. But my pace was fine, so I didn’t think this would cause me any further trouble. As much of the bike course was back and forward, you could easily see where other athletes were. Kaj, Roberto and myself were all within a minute or two from each other. After 15 km my legs decided they didn’t really like this new position on the bike and thought they had put enough effort into it. My right calf completely cramped up, and I was forced to stop for a minute and stretch. Meanwhile Kaj, who was flying on the bike, overtook me and when Roberto passed me, I could continue.

After the 20km of cycling, we entered transition for the second time to start our 2,5km run. Kaj was ahead followed by myself, Roberto and Thomas. I was cautious in the first part of the run, afraid to have another cramp, but I could accelerate in the second part. I already accepted that Kaj would be the strongest FM man today after his strong performance on the bike. With 400m to go, I saw somebody with an FM trisuit and thought it might be worth it to ask one last effort from my legs. With exactly 10m to go I passed Kaj, finishing one second ahead of him. Talk about a close finish.

One minute later Roberto made it to the finish as well. Thomas had a hard day struggling with a severe cold, but pushed through and reached the finish. We all finished somewhere in the middle of the pack, which led us to two conclusions: