Sunday October 9th Sophie and I raced the Dutch duathlon Championships over the distance 10k run-40k bike- 5k run in Spijkenisse. Together with a few others from the Maastricht area we could stay at the house from a friend who lived just a few 100 meters away from the course. The night before our race the Ironman World Championships were taking place in Hawaii, so of course we were stuck in front of the television the whole evening to watch this event. Even though I didn’t make it to stay awake all the way up until the finish line, it did light a fire in my belly and I woke up the next day motivated and in an overall good mood. In the hours leading up to the race I was surprisingly relaxed. The event was well organized, so check-in and preparation went very smooth. I did my warm up together with Ferro Mosae team mate Sophie van der Most and we were feeling well. If everything went okay, we should be able to both make it on the podium. All the way up until the last minutes before the race I still felt relaxed. Together with 20 other female competitors we were just chatting away in the pre-start area. It did not feel like we were going to start a national championships race at all. With about a minute to go everybody shifted their focus to their watches and shortly after the gun went off. Sophie was sprinting off with Miriam van Reijen, our biggest competitor, in her streamline. I was trailing a few seconds later in a following group. My goal was to race the first 10k relatively comfortable without letting the gap grow too big. Looking at my watch at the 10k mark I saw 38.40 min, which I was really happy with, because this was a minute faster than I had predicted. 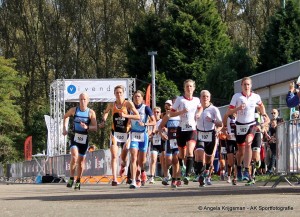 Going into transition I was only 1.30min behind Miriam and less than a minute behind Sophie, so everything was still possible. Then it was onto the bike and soon I had found a good rhythm. The course was a 10km out and back section, which we had to do twice. After about 4km I overtook Sophie and at the 10km mark I passed Miriam as well, which put me in the lead of the Dutch championships. For the remaining 30km I just kept pushing the pedals at the watts I had planned to and before I knew it the 40km were over and I had to put my bike back in transition. The gap towards Miriam had grown to 4min and I had 5.30min on Sophie who has been overtaken by Jolanda Nell and was now in 4th spot trailing Jolanda by 30seconds. Now it was only a 5km run to the finish line. Again I was able to settle into a good rhythm quickly and I felt pretty good. In the last lap on the out and back section I saw Sophie had moved her way up again into third place, so I was feeling happy for her as well. The last few 100meters I was just running on clouds and flying on the finishing chute as the new Dutch duathlon champion. Even though this race was not a goal at all for this year, it is still an incredible feeling to do a race where everything just felt good, strong and in control. I want to thank my teammates from Ferro Mosae and EDO sports for that, because having happy, positive and relaxed people around me is what I need to perform well.

Thanks guys, you are awesome! 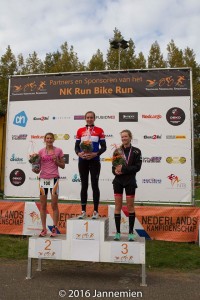